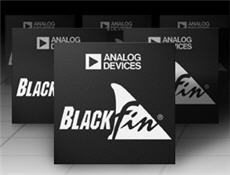 Blackfin DSPs from Analog Devices are quite popular digital signal processors applicable to audio, video, voice and image processing, multi-mode baseband and packet processing, control processing, and real-time security. Blackfin DSPs were among the first of MMU-less DSPs capable to run famous uCLinux in the times when uCLinux was not yet merged into mainline Linux kernel.

Also there is a dual-core BF561 processor with similar functionality to BF533. It looks like Analog Devices combined two BF533 IP cores and glue logic/caches to form BF561.

Being not able to compete with TI giant in powerful, general purpose DSPs, Analog Devices adjusted strategy for Blackfin and made a significant switch to application specific markets for newer Blackfin processor families. After rolling out BF54x and BF52x families, the tendency becomes even more evident with introduction of BF51x, BF50x and BF592.

On picture below you can see a famous BF533-STAMP, the first printed circuit board with uCLinux and BF533 processor designed and released under open source license. 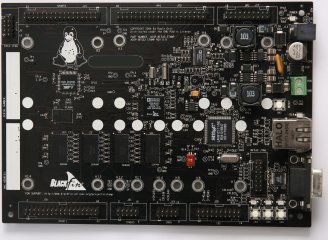 In hardware section on blackfin.uclinux.org there is a couple of STAMP boards and dozen of daughterboards – a good starting point for engineers looking for cheap Blackfin development boards and willing to learn Blackfin processors. 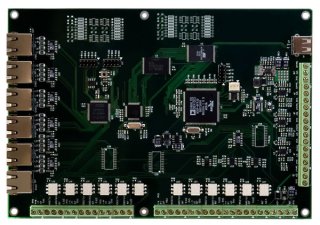